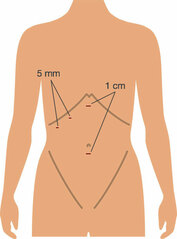 Laparoscopic or keyhole removal of the gall bladder was one of the first procedures to utilise the laparoscopic surgical technique. The procedure has been in use since 1993 in Australia, with many thousands of the procedures being performed. The benefits of the laparoscopic technique include less pain, shorter hospital stays, faster recovery times, fewer post operative small bowel obstructions, and fewer wound infections.

Mr Steven Karametos's standard of care for gallstone disease is laparoscopic cholecystectomy, which is a minimally invasive surgical option for removing the gallbladder. This is a very safe operation.

The laparoscopic removal of the gall bladder (cholecystectomy) is performed under general anaesthetic so the patient must be in reasonable health. Mr Karametos makes three or four cuts in the abdominal wall, each of these cuts is generally no more than 1 cm in length. The first is in the umbilicus. The abdomen is then blown up with carbon dioxide (CO2) gas. This lifts the abdominal wall upwards, and gives the surgeon space to operate. After that, a telescope attached to a tiny video camera is introduced and the abdominal contents inspected. The gall bladder is readily located and is grasped with forceps. It is freed from attachments to the liver. A small tube, the cystic duct, connecting the gall bladder to the bile duct is dissected free of the fatty tissue that encases it and a catheter inserted into it. Dye is injected down this and an x-ray of the main bile duct, which takes bile from the liver to the intestine, is taken. This is to confirm that no gallstones have entered the bile duct where they could cause a blockage leading to obstructive jaundice. Once the Xray has been completed, the cystic duct and the little artery feeding the gall bladder are clipped with little metal clips and divided. The gallbladder is then dissected away from the liver and removed through the small incision beneath the umbilicus. It is like a small bag that passes through the little incision once the stones and bile have been emptied out of it. The operation usually takes 30 to 90 minutes. At the end of the operation the carbon dioxide gas is let out. Laparoscopic cholecystectomy is preferable to open surgery because the cuts made are much smaller, postoperative pain is less, hospital stay is shorter, and the return to normal activity much quicker.

In a small number of patients (less than 1 percent),  it may not be possible to remove the gallbladder by the keyhole method because of inflammation and scarring around the gallbladder, or the anatomy of the structures is not clear. The risk of conversion to open surgery is higher if you have undergone previous operations on your abdomen or suffered from peritonitis. Other reasons for open surgery include a history of bleeding disorders and with pregnancy.

If laparoscopic cholecystectomy is not possible, ​Mr Karametos may consider converting the operation to an open surgical operation through a traditional surgical incision. What is done inside is exactly the same, but there is a bigger wound, and therefore a longer convalescence, usually 3-5 days.